The Shape of the UK’s Economic Recovery 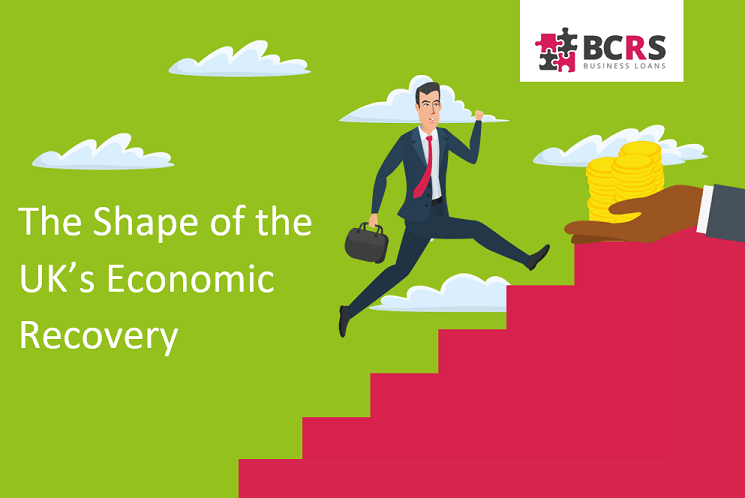 The Shape of the UK’s Economic Recovery

Welcome to this week’s blog post.This week we will be looking at the shape of the UK’s economic recovery and what we know so far. As we are all very aware by now, the Coronavirus has severely affected the UK economy. So much so, that the economy shrunk by 25percent from February – April which is recorded as the most rapid downturn for nearly three centuries.

In the UK, the FTSE 100 has rebounded by 9.1% over the quarter – the strongest three-month period since 2010, when the stock market was recovering from the 2008 financial crisis.

Fast forward to where we are now (August) and there is optimism in the speed of economic recovery as the figures begin to steadily increase. Andy Haldane, Chief Economist of the Bank of England said there were signs of a V-shaped economic recovery – where growth rapidly increases from a steep downturn in activity.

By the beginning of April, an estimated one in five businesses had ceased trading due to the lockdown measures put in place on 23rd March not knowing when or if they would be able to re-open. Businesses operating in the arts and hospitality sectors were one of the hardest hits by the pandemic. However, as restrictions began to ease, businesses began to re-open and manufacturing, retail and construction began to show strong improvement with a reduction in furloughed employees to 20percent and an increase in turnover.

UK spend improved week beginning 3rd August, up by 11% YoY, suggesting improvement relative to prior weeks. UK spend has shown an increase across many sectors including clothing, general merchandise and grocery/bakery/confectionery and has also been helped by spending on DIY and household goods, as well as a sharp increase in car and home sales. Food and beverage spend improvement is continuing, as a result of pubs and restaurants re-opening in recent weeks, as well as recent initiatives such as the ‘Eat Out to Help Out’ scheme.

Job Vacancies on the Rise

Over 9 million people have been furloughed since the coronavirus crisis started the risk of mass unemployment is a great concern which has so far been limited to an extent by the government’s furlough scheme. However, the latest statistics from the Office for National Statistics suggest vacancies have improved since early May with customer service, Transport and Travel and Tourism sectors showing the best recovery so far.

There’s no doubt that the UK has a long road ahead to reach pre-pandemic figures, but the positive economic developments above are a strong starting point for the desired ‘V’ shaped recovery.

That’s all from me this week. For more tips and tricks and trends head to our blog page.