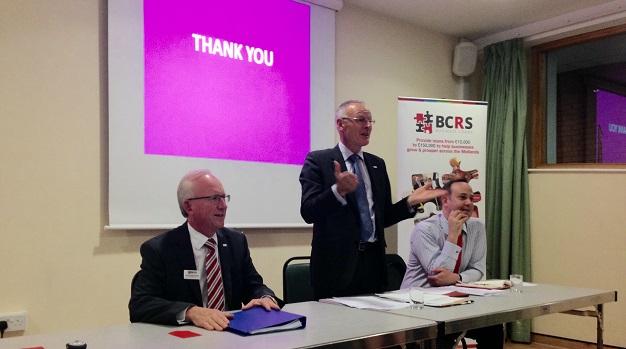 BCRS were pleased to invite board members, special guests and the BCRS team to our 13th Annual General Meeting, which took place on Friday 12th June.

Through strong demand for loans by SMEs across the region and thanks to some innovative funding approaches, BCRS has experienced significant growth in the past year and hopes that it can achieve £6 million of lending to SMEs in 2015 – up from £4.5 million the year before. It has been calculated that by providing local businesses with loans, BCRS were able to inject an extra £60 million into the West Midlands’ economy in 2014.

Chair of the Board, Rob Hill, greeted guests with an opening speech reaffirming the organisation’s continued efforts to support local businesses in the West Midlands region.

Paul Kalinauckas, founder and Chief Executive of BCRS Business Loans, delivered a presentation to review the past year of growth as well as taking the opportunity to detail the organisation’s plans for the future. Paul highlighted that BCRS are currently preparing for FCA authorisation, while efforts are being made to implement a client, portfolio, performance and document management system and establish an internal Risk & Audit function.

At this point Alan Gilmour – a marketing consultant from Cogent – took to the stage to provide guests with an overview of results he gathered from a lengthy market research project conducted earlier this year.  According to Alan, customers reported an appreciation for the relationship-based approach to lending that BCRS provide. Contacting a lender for a business loan can often be a stressful and daunting experience, but Alan reported that offering face-to-face meetings with businesses, where any issues or questions can be raised with Business Development and Lending Managers, proved to be essential in putting customers at ease.

Alan found that most customers were willing to recommend BCRS to anyone looking for an alternative source of finance. Every Business Development and Lending Manager at BCRS has a lengthy experience of working with businesses and it is therefore pleasing to hear that our stakeholders commented that we are ‘people who get the business of doing business’.

Research found that the team at BCRS really took time to understand the needs of each business on an individual basis and that customers appreciate the support and guidance they are offered. While most mainstream lenders tend to avoid providing finance to SMEs, the fact that BCRS are prepared to take risks demonstrates a belief in small business and an appreciation for the beneficial impact they have on the regional economy.

BCRS were delighted to have one of our customers present to explain how BCRS had helped his business.

After being made redundant at the height of the recession, Dee Benning, Managing Director at Lordswood Architectural Limited, saw an opportunity to establish a façade engineering business to seize a chance to employ a number of highly skilled engineers who had also been made redundant. Although Dee had a vast amount of experience in senior positions in his industry along with an excellent business plan, he still found it impossible to secure funding from mainstream lenders to set up Lordswood Architectural.

His applications for finance were refused purely because, at that time in particular, banks perceived businesses that operate in the construction industry to be high-risk. Thankfully, after contacting BCRS, we were able to supply Lordswood Architectural with an initial loan to establish operations and a second loan to ease cash flow issues caused by 60 day payment terms in many contracts.

Almost three years later, the company has created over 25 new jobs and has a turnover in excess of £3 million. According to Dee, Lordswood Architectural wouldn’t be where it is today without the initial help and belief from BCRS.

We would like to thank all of the guests who attended our 13th Annual General Meeting, along with Members of our Board, customers, speakers and our team. We hope to see you all next year with more positive news and exciting plans for the future of BCRS.