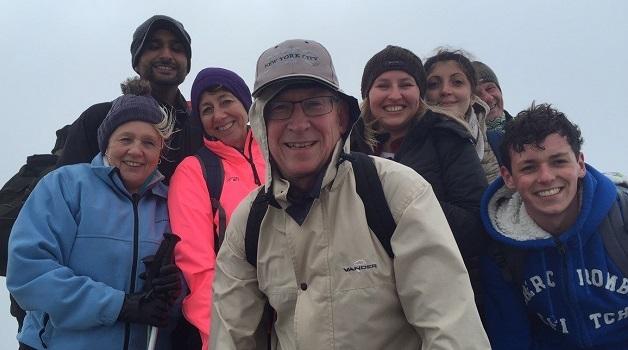 On 12th September, eight members of the BCRS Business Loans team made the two and a half hour journey to North Wales to climb Mount Snowdon – the highest point in England and Wales.

BCRS Business Loans organised this event as a team building exercise; an opportunity for team members to meet outside of the office environment and complete a challenge together.

In line with traditional Welsh weather, we were welcomed into Snowdonia National Park with a downpour of rain; although thankfully, by the time we were ready to start our ascent up the mountain – and after having one last caffeine boost – the rain had passed and we set off, blissfully unaware of the struggles that lay ahead.

We opted to walk up the Llanberis Path which, although considered to be one of the easiest routes to the summit, is still a long slog from the village of Llanberis. The path itself is has a distance of 9 miles there and back, will see you climb 975 m (3,198 ft) and should take approximately 6 hours to go from base to summit and then back to base again.

Unusually, the most torturous part seemed to be the very beginning. A number of steep tarmacked climbs, taking us past a café and shop, led us to a gate that signalled the start of the mountain path. After this, we were all wondering how we would continue to the top – but thankfully the paths ahead boasted a much more gradual ascent than the previous intense 10-minute climb.

We started on our journey up the mountain, ploughing through the cloud, only able to see a few metres ahead. By this point, our muscles had warmed up and we were all getting into our stride. Chatter and laughter was present for the whole journey, even in the more testing phases, which demonstrated the team spirit that exists within BCRS Business Loans.

After walking beside the railway track for a good distance we reached Halfway Station, where many of us stopped to have a quick snack to build up some energy for the rest of our journey.

As we were nearing the tunnel, where the path takes us under the railway line, the clouds parted briefly to reveal a magnificent view of the valleys below and surrounding peaks – a view that spurred us on to see even better views further up the mountain; providing that the cloud would allow it. We even had time for a couple of selfies.

It was at this point that a few members of the team started to feel tired and that they may struggle to carry on to the summit, but sheer persistence and determination pushed them onwards, accompanied with support from other team members.

After walking through the tunnel and turning right, the path steepened towards the summit. This section proved to be one of the toughest sections of the track. The steep gradient and loose stones, combined with reduced levels of oxygen as the air got thinner, made it quite difficult. But again, the whole team powered through, taking regular breaks to reach the thin path to the summit.

Before we knew it, we were at the summit of Mount Snowdon and we had collectively achieved our goal – the tiresome journey up was worth it after all. We waited patiently for our turn to climb up to the plinth and have our photograph taken, even though we had started to feel the cold after being stationary for a while.

We did it! We had battled against the cold, rain, wind and fog. Even those who struggled their way up the mountain were pleased to have done it and were rightfully proud of their achievements. It was truly a team effort too. If one person stopped for a breather, we all followed suit – making sure that we climbed the mountain together. If one person was struggling at a particular stage, we would stay with them to keep them motivated. Or, if they felt the need to stop and return to the base, we would all have done so without a grumble.

The journey back down never seems as bad, especially when a tea/ coffee break was scheduled for Halfway Station.

We will all look forward to our next team exercise.