BCDC Attracts a Scorching Crowd in a Very Dreary July 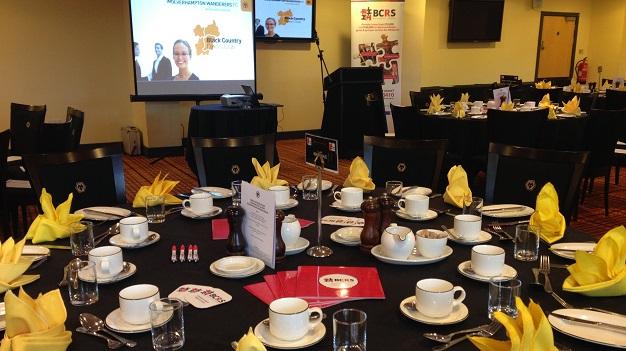 BCDC Attracts a Scorching Crowd in a Very Dreary July

One of the leading professional networking events in the Black Country secured its highest summer attendance for over three years and provided a thoroughly enjoyable afternoon for all.

The Black Country Diners Club (BCDC), held on a quarterly basis at Wolverhampton Wanderers Football Club, has been running for over ten years and is hosted by BCRS Business Loans. The event offers professionals and business-people the chance to network over light refreshments, before being seated for a two-course lunch and an interesting talk from our guest speaker.

The July instalment continued to demonstrate the popularity of this event, after attracting bookings from 84 people. This event attracts professionals from a range of different sectors, including: banking, accountancy, legal, brokerage, recruitment, HR, consultancy and many more.

Upon arrival, guests were welcomed into a bustling networking arena where they were encouraged to chat away and form new working relationships with the many new professional contacts that stood in front of them.

As the time approached 12:30 and guests had enjoyed 45 minutes of busy networking, it was time to wind down and enjoy a two-course meal. Everyone tucked into a main course of Oven Baked Cajun Chicken Fillet rested on a bed of salad with new potatoes;  followed by the all-important dessert of White Chocolate & Raspberry Cheesecake served with a raspberry compote.

Our special guest speaker for this event was Dr. Geoff Parkes, who has had a diverse and prosperous career culminating in him being Head of the Marketing Group at Aston Business School in Birmingham. Geoff’s marketing career consisted of roles at Ideal Standard Corporation and Black & Decker, before spending 10 years at Aga Cookers as their Sales and Marketing Director. Prior to attending Aston University as a visiting lecturer and most affiliated with the subject of this talk, Geoff ran a Commercial Finance brokerage that raised in excess of £20million per annum for small businesses.

Geoff’s talk was entitled ‘Marketing for Money’. Although new forms of funding have emerged, lending to businesses has reduced every year since 2009. Geoff presented findings from a study which aimed to discover the funding outcomes and behaviours associated with an entrepreneur attempting to finance a small firm. Interestingly, results contradicted the stereotypical risk-taking, impulsive and independent entrepreneur.

Geoff’s results demonstrated a clear indication that entrepreneurs that scored highly in psychometric testing for working with others, communicating, meeting and presenting, working with customers and driving for results were more successful at securing finance.

After analysing results from a range of psychometric data, Geoff was able to establish three key groups that had similar entrepreneurial strengths and weaknesses. Those that scored particularly highly in all of the skills mentioned above whilst also excelling at problem solving and showing resourcefulness in sourcing alternative sources of finance, were classed as ‘Capables’. Unsurprisingly, this group was most successful at securing funding.

Most believe that entrepreneurs have to be ruthless in their attempts at setting up a business, but this second group contradicts that by adopting a theory of ‘collaboration’ – which forms the name of the group.  A collaborative approach to finance may mean that business owners have to source finance using a number of different methods – to ultimately create a full package that will meet their needs. In addition, the study also found that those who were willing to work with an external business advisor were more likely to submit a stronger application and make more calculated decisions.

Those who were least likely to secure finance were those classed as ‘Low Competences’, who scored low in the majority of psychometric indicators.

This proved to be a very interesting talk that some attendees described as ‘thought-provoking’ and ‘very useful’. We would like to extend our thanks to Dr. Geoff Parkes for attending Black Country Diners Club and delivering a great talk.

Preparations are already underway to start organising the next edition of the Black Country Diners Club which will take place on Tuesday 13th October. We are incredibly proud to announce that the guest speaker for the next event will be Mark Beresford Smith, who is Chief Economist at HSBC.

This is definitely an event not to be missed, so please pop the date in your diary. We will be sending email invitations out 6 weeks before the event. If you would like your email address to be included on the mailing list for this event, please send an email to ‘Events@bcrs.org.uk’.